Runaway – Takes on Diversity within the Gaming Industry 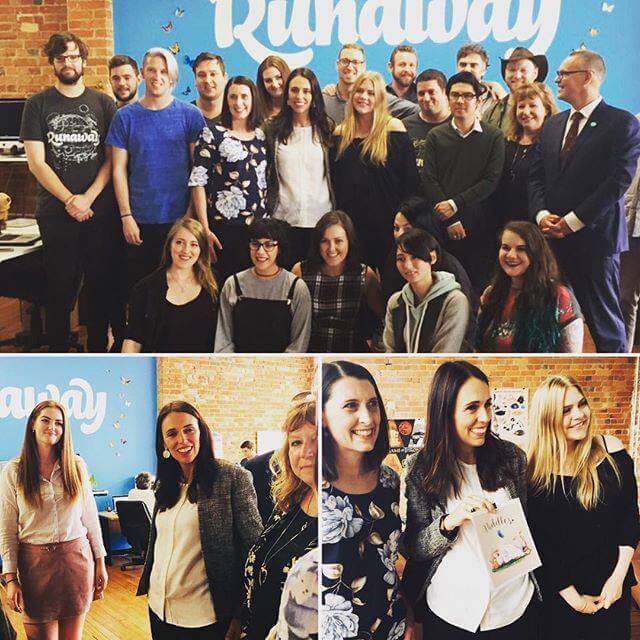 A #GirlsBehindTheGames campaign has been launched by a games studio in New Zealand, called ‘Runaway Play’. The campaign calls to promote gender parity and diversity within the gaming industry, through positive media stories and social content about inspiring women in tech. In the lead up to International Women’s day on the 8th of March, Runaway are creating inspiring videos and content presented by the women of Runaway, sharing their experiences and advice to help promote women in the gaming industry.

Runaway enjoyed an added bonus as they launched the campaign, with a visit from a very inspiring woman – Jacinda Ardern, the Prime Minister of New Zealand – who was very supportive of the initiative. The Prime Minister posting on Facebook and Twitter “Meet the team @runawayplay They’re a team of amazing game developers who today launched something called #girlsbehindgames to encourage more women into the industry. A brilliant thing to do given how many are gamers but just over 20% work in it.”.

The “Girls Behind The Games” campaign emerged from the planning work for Runaway’s launch of Flutter VR (a VR title for Daydream by Google, specifically made for women) and the work the team were doing to promote Runaway’s gender parity dedication.

The industry continues to call for diversity, to promote the industry as a career choice for women, in order to address the inequality that no longer aligns with a rising audience of girl gamers: with 45% of gamers having identified as women and yet women only make up 22% of the game industry workforce.

Runaway wants to improve those numbers by increasing the awareness of women in the industry and highlighting the incredible work they do. Runaway’s efforts align with those of the recently launched “Change The Game” campaign from Google. The #GirlsBehindTheCampaign efforts will simultaneously help to achieve some of that campaign’s goals, too.

ith the hope of creating a positive storm of content about women working in tech, Runaway’s “Girls Behind The Games” campaign will run through their website girlsbehindthegames, a newly created twitter page and with the help of the twitter community sharing the hashtag #GirlsBehindTheGames.

At Runaway, the staff believes that they are part of that positive change by ‘walking the walk.’

Three successful mobile game titles (Flutter: Butterfly Sanctuary, Flutter: Starlight and Splash: Ocean Sanctuary) are enjoyed by over a quarter of a million players each month from the US, across Europe, to China and Japan.

Runaway are offering mentorship to women, writing articles promoting the great work that women do in tech, planning sponsorship for women entering Computer Science and guest speaking at local schools.

The games studio has worked hard to make inclusion, mentorship and female leadership an integral part of its studio growth strategy. Because of this, we now enjoy close to gender parity (with 10 of 26 staff female), and women occupying the only two senior leadership roles – as Managing Director and Creative Director.

Staff diversity enables our team to produce games that appeal to a wider audience, inclusive of women, and other marginalised groups. But this kind of recruitment diversity requires a pool of talented girls to join – and be supported to remain in – the games industry.

Can you walk the talk?

How does your organisation support diversity?